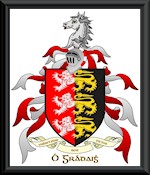 The name O’Grady originated from one of the most illustrious of the Dalcassian clans and one which has remained closely associated with County Clare. The surname is derived from the Irish form Ó Grádaigh or Ó Gráda (noble) and is said to come from their traditional ancestor, Grádach.

The present head of the clan, The O’Grady, or “chief of the name” as he is so styled, holds one of the few authentic native titles recognised by the State. The O’Grady family tree contains many other distinguished figures prominent in public and social life as well as members who became involved in cultural activities in times past.

The original territory of the O’Grady comprised much of the Barony of Lower Tulla, but an ancestor Hugh O’Grady left Clare in the beginning of the 14th century to settle at Killballyowen near Bruff in Co. Limerick where he acquired by marriage a good deal of land and property.

His son William married a daughter of the Knight of Glin while the family continued to enjoy a high social standing, references to which may be found in Burke’s “Landed Gentry of Ireland”.

The most distinguished bearer of the name must be the scholarly Standish Hayes O’Grady who in his student days was a friend of both O’Donovan and O’Curry and undertook the task of cataloguing Irish Manuscripts in the British Museum.

His most important work, and of interest to local historians, is his translation of the “Caithréim Thoirdhealbhaigh” as recorded by Sean MacCraith, the only contemporary account of the principal events which occurred in North Munster from the 12th to the 14th century.

His cousin, Standish James O’Grady also gained a place in literature as novelist and historian. He wrote a history of Ireland emphasising the importance of our heroic period and widely known mythological figures. Several historical novels also came from his pen which include “In the Wake of King James”, “The Flight of the Eagle” and “Red Hugh’s Captivity” all of which aroused a new interest among his contemporaries in Irish epic literature.

The name is still to be found throughout East Clare while it is to Iniscealtra (Holy Island) in Lough Derg one must go to view an impressive memorial to their forebears complete with a carving of the family arms and motto “Vulneratus non Victur” – “Wounded not Conquered”. It is erected in the interior of St. Caimin’s Church whose splendid Romanesque Doorway is now fully restored; this tablet bears the following inscription “J. A. Grady reported those churches and monuments to the Grace and Glory of God 1703.”

The leaders of Fine Gael and Fianna Fáil, Leo Varadkar and Micheál Martin, are expected to meet late [...]

The EU will today formally approve a mandate to begin negotiations on the future relationship with t [...]

The Department of Foreign Affairs has clarified that there is no change to its overall travel advice [...]

Former Hollywood producer Harvey Weinstein has been convicted of sexual assault and rape but cleared [...]

30 hurt after car driven into crowd at German carnival

At least 30 people were injured after a car ploughed into a carnival parade in the western German to [...]

Calls for greater efforts to tackle impact of flooding

There have been renewed calls to improve flood defences in areas that have once again been inundated [...]

Appeal in Dwyer case referred to EU Court of Justice

The Supreme Court has said it intends to refer Graham Dwyer's case over the retention and acces [...]

Authorities in Wuhan have reversed a decision that would have allowed some people to leave the quara [...]

The jury has begun its deliberations in the trial of a man accused of murdering a grandmother of sev [...]

Scan with your mobile device